[ Sky – Master Post ]
Title: Darkening Like a Stain
Fandom: Sky
Characters: Sin, Sebastian
Rating: T
Warnings: Expletives and violence
Notes: So, I realised I haven’t done much with exactly how violent Sebastian really is, when he’s not all there. And I think I’ve mostly written the easy parts of his relationship with Sin — not so much the parts where things do or could go really bad, really fast. So, here’s one of the ridiculously many times that Sebastian almost knocked Sin’s teeth out. (With adorkable sleeping Sebastian art!) 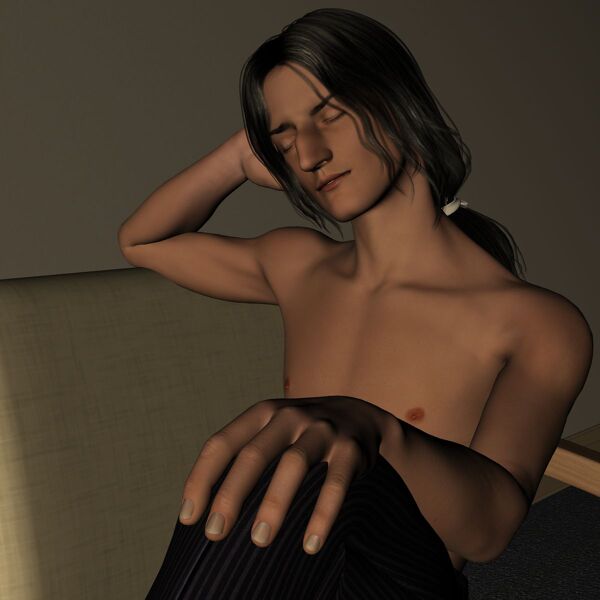 Sin kicked the door shut, expecting that Sebastian would still be awake, but when he set the take-out on the coffee table, that presumption was proven incorrect. Sebastian had dropped the book he’d been reading, and was curled up around himself, shaking — not an entirely unusual state of affairs. Sin still didn’t know exactly what had happened to make Sebastian such a headcase, and he wasn’t sure he wanted to know. Some nights he was afraid that if he found out, he’d do something he’d never be able to forgive himself for. And that was something he never mentioned — he never wanted to give Sebastian the slightest idea that he might be something other than frivolously jaded.

But, Sebastian never slept intentionally; he just waited for the exhaustion to force him into unconsciousness while he studied. Sometimes, Sin wouldn’t bother to wake him, but would, instead, just carry him to bed. At barely a hundred and thirty pounds, Sebastian wasn’t that heavy, and Sin liked to have an excuse just to hold him. Other times, Sin would wake him, either because he’d brought home take out or because Sebastian was having nightmares — or, at times like this, both.

Kneeling between the couch and the coffee table, Sin reached out and pushed the hair out of Sebastian’s face. "Hey, I got you dinner."

Sebastian didn’t respond at all, far too engaged in the nightmare to recognise any outside stimulus. So, Sin did what was generally sensible, at times like these. He gathered Sebastian into his arms and stood up. Unfortunately, that was when Sebastian woke, and he woke howling and terrified.

"Stop touching me! Get your hands off me! Who the hell do you think you are?" Sebastian bit the hand on his shoulder and swung wildly, his fist making contact with something, before he twisted out of the arms holding him up. He scrambled over the sofa and cowered behind it, as Sin fell back over the coffee table.

The apartment was disturbingly quiet, for a few lengthy moments. Sin wheezed and groaned, trying to decide if anything was broken. He was probably going to have a black eye, in about another fifteen minutes, and the coffee table had flipped onto his hair, before he landed on it, but he was pretty sure that nothing was actually broken. Might have sprained something, but that could wait until he wasn’t twisted around a coffee table, to decide.

"Sebastian? You okay?" He wasn’t sure what the hell just happened, but he knew he’d dropped Sebastian pretty quickly.

"Yeah. It’s me. I think I might need some help getting up, if you’re in one piece."

"Son of a bitch." Sebastian stood up, still shaking, and looked across the living room. "I just punched you in the face, didn’t I?"

"I thought it might have been a knee. I couldn’t tell," Sin wheezed. "But, I’m on my hair, and I can’t untwist my back."

Sebastian sighed and walked around the couch. "No, it was a fist. My knuckles hurt." He studied Sin’s position, carefully. "How’s your neck? If I put your legs on my shoulder, are you going to be all right? I need to get you off the table before I can get it off you."

"You’re not going to kill me. I promise."

"Actually, I might. I’m really sorry. This is exactly why I try so hard not to sleep." Sebastian lifted Sin’s legs over his shoulder, and pulled the coffee table out of the way, before setting Sin down, probably on his own hair. "I think you can get yourself the rest of the way out. Do we have ice? I’m going to go get you something for that eye. I’m sorry. I didn’t mean to fall asleep."

Sin rolled over and finished extracting his hair from the table and everything that had been on it. "We have frozen peas. Get a dishtowel and a fork, while you’re over there. Whatever didn’t just explode onto the floor is still dinner, and I know you can’t eat with chopsticks. I’d make you learn, right now, but I’d like to make sure you didn’t break a knuckle, first. You hit me hard enough that it’s really possible."

"Shit, I’m sorry, already. I was unconscious." Sebastian threw a bag of peas at Sin. "You know I don’t wake up all fucking sunshine and light."

"Yeah, I know. I was just hoping I had time to put you in bed, before you completely lost it. You’re a little easier, when you wake up in bed." Sin held the bag of peas to his face with one hand, and sorted through the things that had fallen from the table, with the other.

"You’re probably right. I don’t know. I’m in it, not watching it." Sebastian came back with silverware and a sponge, in one hand, a dishtowel over his shoulder, and the dustpan and a paper sack, in the other hand. "Go sit on the couch. I’ll take care of this. It’s my fault; I’ve got it."

"You’re still shaking. Sit the fuck down," Sin insisted, grabbing the towel and the dustpan.

Sebastian smirked and shook his head. "Dinner first. Then we can fight about who gets to clean the floor."

Sin looked like he might have something else to say, but he picked up the bag of take-out and put it on the table. "Done."

Sebastian set down the rest of what he was holding and sat on the couch. "I really need to stop punching you in the face."

"Ehh, it was an elbow, last time," Sin pointed out, levering himself onto the couch. "Variety, you know? Keeps it from ever getting boring, around here."

"May you live in interesting times," Sebastian quoted, opening the bag. "I think everything leaked, but it doesn’t look like anything actually opened. Is that beef and broccoli?"

"I told you I was going to handle dinner, tonight. You doubted my Chinese menu skills? For shame. Of course it’s beef and broccoli." Sin leaned over and grabbed one of the containers from the bag. "And one of these is pork chow mein, because I have the weirdest craving, right now."

"Hey, look at me," Sebastian commanded, wiping his hands on his pants. When Sin did so, Sebastian kissed him, square on the lips. "You do love me, don’t you?"

"Every day of my life. Even when you punch me in the face, you little shit." Sin kissed back, briefly.

Sebastian shook his head. "I will never understand you. But, I do appreciate you. And dinner. You sure you’re not pissed about your face?"

"Oh, I’m pissed. And it hurts. But, it’s also my fault for picking you up. I know you do that, sometimes. Perfect example of what happens when I don’t think." Sin opened the container he was holding, and then traded with Sebastian. "I’m not worried about it. Let the adrenaline bleed out. I’ll be a little whiny for a couple of days, but I’ll be fine."

"You’re used to people fucking with you, because you’re there. I really can’t hold it against you that sometimes you punch me, before you finish waking up. You’ll get better, I’ll learn to duck, and we’ll be fine." Sin grabbed a pair of wooden chopsticks from the bag. "Now, shut up and eat your dinner. I walked all the way down the street to get it."