tehopheliac gave me a crack!prompt with which to generate her Christmas gift, and it is both late and crap. The pointy!boxers are apparently an actual feature of the new Spock Prime figures, and this was our attempt to explain them. I got nothing.

[=EDIT=] Now with art by @thisfishflies! 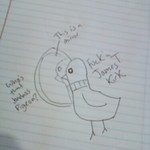 It was an accident. A horrible accident, but an accident, no less. As the away team returned to the ship, three humanoid bodies resolved… and one pigeon.

Spock was the first to speak. "Mr. Scott, retrieve the captain at once."

"I’m sorry, Mr. Spock, but that is the captain." Scotty shrugged, wide-eyed, gaping, stunned, at the bird on the transporter pad. "There’s been a bit of a malfunction. I’ll find it and we’ll get the captain back to rights. It … just might take a day or two."

"As swiftly as possible, Mr. Scott," Spock insisted, as the pigeon hopped onto his shoulder and pecked lightly at his cheek.

Spock tried his best to work, but the pigeon that had been the captain continued to strut obnoxiously across his console, cooing and fluffing its chest feathers. Any attempt to bat the pigeon off the controls resulted in what had been dubbed by the bridge crew ‘the angry pigeon dance’, which involved a great deal of hopping from foot to foot, pecking and cooing disgruntledly. It was, Spock thought, the first time he’d ever been compelled to describe a less than friendly cooing sound. He’d been unaware such a thing was possible, until that moment.

But, it wasn’t until after lunch that things became truly unbearable. The pigeon decided that simply occupying Spock’s console was insufficient. No, now, it seemed, it was bent on occupying his lap — possibly even nesting in his lap. It was the most uncomfortably inappropriate situation Spock had been forced into, on the bridge, since that time the captain started a fight with a Klingon commander, because they were both drunk on Romulan ale.

"Captain, I must insist that you remove yourself, at once, from my person," Spock demanded, staring at the pigeon in his lap.

The pigeon looked up, fluffed its feathers, and cooed.

Spock glared and the pigeon stared right back.

Finally, in abject irritation — a most un-Vulcan emotion — Spock stood, to leave the bridge, dropping the pigeon, unceremoniously. The pigeon, in a fit of pique, fluttered up to void its bowels on Spock’s console, before committing itself to another round of the angry pigeon dance, across the top of the accompanying screens.

"That was a rather impolitic decision, Jim," Spock commented, eyebrow raised, as he turned to approach the turbolift.

The pigeon danced victoriously atop the console, before straightening up, ruffling its feathers, and launching itself toward the closing turbolift doors. Spock hoped it hadn’t gotten caught in the doors, since they did require the entire pigeon, to recover the captain. He headed toward Engineering, determined to extract a solution to his troubles, from Mr. Scott.

"Can you recover the captain, yet, Mr. Scott?" For a Vulcan, Spock looked quite irate, although he was still impossibly calm, for a human.

"No, sir. I told you it would be a day or two. It’s barely six hours, now. We’re working as fast as we can!" Scotty gesticulated angrily, with a hyperspanner, from under the transporter console.

"Then I require your assistance with a related matter, that has become most urgent, in the absence of the captain’s original form. This pigeon has begun attempting to nest in my lap." Spock’s eyebrow arced up. "As pigeons are not a native species of Vulcan, we do not have any standard methods of repelling them from our nether regions. As you are both human and an engineer, I must defer to your judgement, in this instance."

Scotty sat up so fast that he smacked his head on the bottom of the console. "You need to keep him off yer lap? I don’t think that’s a common problem on Earth." The engineer blinked up at the Vulcan science officer, towering over him. "We have a standard-issue solution for keeping them off of rooftops. I suppose I could adapt that for you, but you’d have to be extremely careful with it."

"Please do, Mr. Scott. It has become impossible for me to get any work done." The eyebrow climbed higher. "How long will this take?"

"No more than an hour, I’d imagine. Just need to verify the structural viability of it." Scotty stood, making his way toward the industrial replicator, in the next room.

"Swiftly, Mr. Scott." Spock turned and left, wondering if he could find a reason to avoid the bridge for an hour.

It was, in fact, only twenty minutes before Scotty called Spock back to Engineering, to try out the new pigeon repellent.

"Are you quite certain, Mr. Scott? These appear rather … sharp." Spock eyed the garment, suspiciously.

"That’s the point, sir. These trousers are designed to be impossible for a pigeon to sit on, but easy for you to sit in."

"Is there a way to make the adjustments to the uniform less … visibly apparent? It would not do to have the entire bridge crew’s attention on my trousers, instead of their work."

Scotty eyed the garment again. "Well, we could make the adjustments to your pants, instead… Regulation undergarments wouldn’t be too hard to change, but then you’d have the concern of destroying yer trousers with ’em."

"If the spines were sufficiently slender, I do not think they would do considerable damage to the cloth," Spock noted.

"Aye, but then you’ve got the structural concerns of whether it’ll resist the weight of the bird, instead of just bending away beneath it." Scotty scratched behind his ear with a laser micrometer, and turned back to the design console for the industrial replicator. "Five minutes. Stand by…"

Spock was surprised at the durability and near-invisibility of the second garment with which Mr. Scott presented him. At a glance, they appeared to be standard-issue Starfleet boxer-briefs, but the thigh-front cloth was coated in slender spines, just long enough to traverse the feathers and poke at the pigeon. Stepping behind a stack of crates, Spock tried on the new undergarment.

"Indeed. That appears to be an ill-advised action," Spock commented, stepping out and examining the fit of his uniform.

Within moments of Spock’s return to the bridge, the pigeon that had been the captain began his dance, hopping from foot to foot and strutting with his feathers fluffed out. Spock merely raised his eyebrow, smugly, and reclaimed his seat. The pigeon followed him into the chair, and within milliseconds, warbled in profound irritation, hopping about in Spock’s lap, in confusion. The bridge crew gaped, as the pigeon took flight, depositing evidence of its displeasure atop Spock’s head, before returning to its perch atop the console.

Spock’s eyebrow arced up, in stunned dismay, and he hailed Engineering. "Mr. Scott, I fear the captain must be contained, until your work with the transporters is complete. Please have a birdcage delivered to the bridge, at once."

"Aye, sir. Are you certain he’s not going to be too peeved when we get him back to rights? I’d hate to be court martialled for imprisoning the captain…"

"I assure you, Mr. Scott, the captain will thank you for preserving his life long enough to be returned to normal. Spock out." With that, he left the bridge, again, this time to take a shower.

It was about twenty hours later that James Kirk found himself flat on his back, on the floor of the transporter room, staring up at a distinctly unamused Vulcan. "Spock! … What the …" He looked around. "What in god’s name just happened?"

"Spock, are your pants … pointy?" the captain asked, sitting up, still a bit dazed.

"Yes, sir. You are advised not to ask too many questions, right now. Dr. McCoy estimates that it will be approximately forty-eight hours, before you regain the ability to process reality, appropriately." Spock did not want to discuss the pigeon’s behaviour, with his captain. With any luck, the bridge crew wouldn’t mention anything untoward, and he would be able to put it all behind him.