Title: Tamiel & Galharda
Fandom: Magelight
Characters: Tamiel ♂, Galharda♀
Rating:T" src="https://penbrydd.groundline.net/wp-content/luxintenebris/rating/PG13.jpg" width="32px" /> (L0 N2 S0 V0 D0)
Warnings: A demoness with half a shirt, showing a lot of leg.
Notes: So, this is one of those things that goes a little better if you’ve got context. There is a demon/fallen angel called Verrier, who is "Prince of Principalities, and tempts men against the vow of obedience, and makes the neck stiff and hard as iron, and incapable to stoop under the yoke of obedience." (Hell’s Hierarchy, 1612) In constructing Magelight, we built Verrier’s family as imperial anarchists — they’ll help you overthrow, as long as you keep overthrowing what they want you to, and don’t turn against them. They spread their empire of rioters to wherever they can find an unstable situation to exploit. Revolution? The House of Verrier was there. More on these two below the cut. 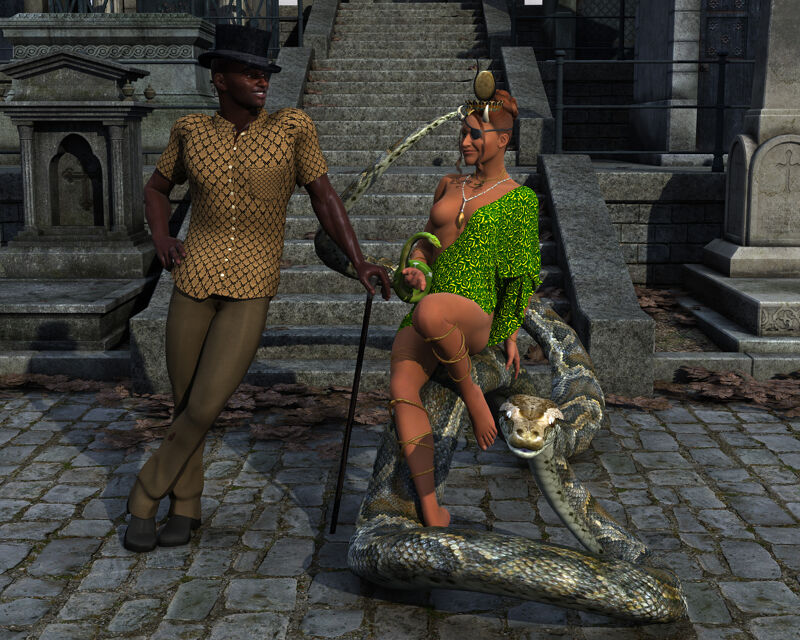 Galharda is a step beyond her great-great-grandfather, in that she successfully installed herself as the incarnation of a local deity, and manifested the goddess’s powers through illusion and skill. After the revolution, she took her followers with her, which was something of a change in the usual plan. She’s a colonial horror, and a cult leader exploiting the devout. She’s also wearing an Egyptian crown, which is not technically correct, but it’s what I’ve got. Assume Tamiel gave it to her.

Tamiel is six hundred years older than Christ, an uncle to Galharda’s mother, and has no blood that isn’t angelic or demonic in origin. While he was deeply involved in the conflicts of D’mt, Kush, and Sheba, his name appears merely as a passing mention in the Book of Enoch, which was his only real fame, until he took an interest in 18th and 19th century French conflicts, always appearing just behind the famous revolutionaries.