Title: You’re Sure Your Cousin Had No Sons?
Fandom: Magelight/Potterverse/Other (crossover)
Characters: Kerrith, Frost, Roddy
Rating: T (L1 N1 S2 V0 D1)
Warnings: Bottom-pinching distant cousins, crossdressing, that’s not a skirt it’s a wide belt
Notes: This is on my list of things that would probably be funnier if they didn’t need to be explained. Ok, so, crackover from hell, here… That’s Kerrith d’Shada, on the left; Frostburn, in the middle; and Rodolphus Lestrange, on the right. You’re starting to wish I was kidding, aren’t you… (Half the joke, here, is that depending on whose fanon you query, Frost and Roddy are sometimes technically distantly related.) 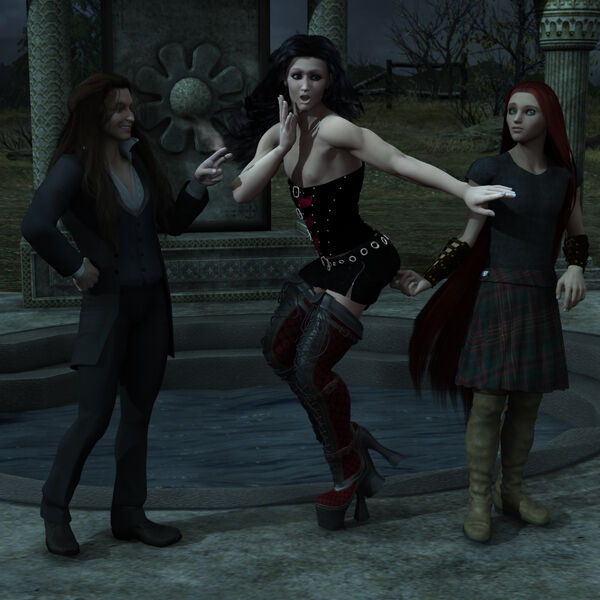 Frost: An’ fer all the bastards in the line, I’ve not once —
Roddy: *pinches Frost’s arse and doesn’t quite manage to look innocent about it*
Frost: *shrieks* Jaysus!
Kerrith: *grins* My family is dead. I think this may be all the proof I needed of why my world is a better place for that lack.
Roddy: Ah, come on, Frost. Noctis said ye were the easy one of us!
Kerrith:*grins wider* And you’re sure your cousin had no sons? I’m seeing the family resemblance…