Title: One Historian to Another…
Fandom: Magelight/Viridian Legacy
Characters: Sin, Frost
Rating: G-
Warnings: Bad, bad things were done to Irish history to make this story… No one is terribly likely to notice.
Notes: I just wanted to see if I could get Frost and Sin in the same place at the same time. Happy birthday, Frost! I got you something as bright and as tall as you! *laughs* 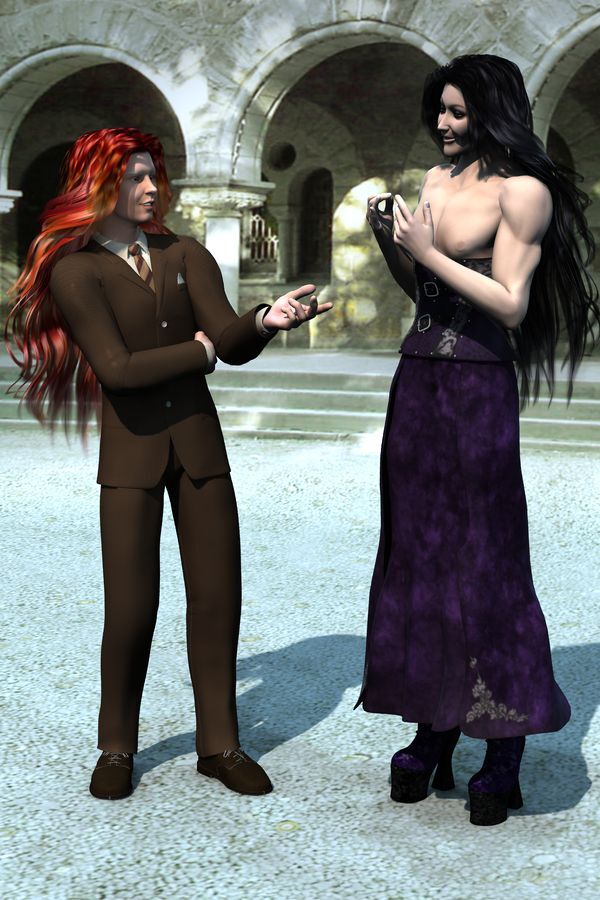 "Lóðurrsson!" Frost called out, as the scholar ahead of him left the building. He’d missed the man’s name, but there was no mistaking the peculiar pull he’d had on the audience.

Sin stiffened, looking over his shoulder in slow astonishment. "Who are you?" he asked, focusing the whole of his attention onto Frost.

It was like the plaza itself had pinned him with unseen eyes, but Frost was used to the staring and the crowds, and it was a short fight to shake it mostly off. "I knew yer godfather," he finally answered, with only a few drops of sweat to show for the struggle.

"I don’t doubt it," Sin replied, amazed to see someone shake him off over something so small. "But, that’s not what I asked." He refocused and asked again. "Who are you? You know me, by reputation, at least. It’s hardly fair to keep me at the disadvantage, if you want something from me."

Frost swallowed hard, before answering truthfully, but uselessly. "I’m the man as noticed ye were wrong. It’s not Adomnán as cursed the sons of Írgalach. I’m not carin’ what it says in the Annals, acos the Annals are decidedly Christian influenced, t’the point they’re ignorin’ the obvious."

It took Sin a few moments to absorb the accusation. "You’ve got to be kidding me. Where did you even find a reference, outside the Annals?"

"There’s a bit of a story, there, ye see, an’ I’ve nay mind t’be tellin’ all of it. Jest let it be said yer lookin’ fer a petty queen among the Uí Néills, but blood to none of them. An’ the offence wasn’t the death o’Niall mac Cernaig Sotal, either, fer all it’s said t’be. It’s the death o’the one he was meeting with, that night." Frost counted the points off on his fingers. "An’ as t’how I’d be knowin’? It’s an ancestor o’mine as was in that meeting, an’ blood o’mine as did the cursing, if such things as curses are t’be believed, Lóðurrsson." He left an emphasis on the sobriquet, as if to point out how utterly ridiculous it would be for a man who’d gained his power from a deity to doubt the force of a well-placed curse.

"Singularity," Sin finally corrected. "But, even if your family has passed down the tale, what makes you think it’s more accurate than the Annals? I’ll give you that the Annals are questionable in more than a few cases, and all historical documents need to be taken with a grain of salt, but… why should the private mythos of one family, presumably with no written record, be accepted as a legitimate source?"

"Ye do age well, fer yer kind. I age better. An’ no, I wasn’t there, so don’t be givin’ me that look. Jaysus, it was a fair bit afore even me, but it’s still fewer generations than ye might think." Frost shrugged and gestured to an old brass gate at the edge of the plaza that Sin couldn’t swear had been there a moment ago. "Let me buy ye a drink, an’ then ye can tell me I’m mad, yeah?"

Sin was fairly convinced that the monochrome gent in the violet dress was entirely mad, but he kept coming back to how the man had shaken off the influence and, more than that, had identified the source. Madman or not, Sin could discuss the politics of the Síl nÁedo Sláine over a drink, with him. At least until he figured out some reason for that uncanny introduction. "I still don’t know your name," he pointed out.

"What’s in a name?" Frost asked, leading the way through the gate. "Ye can be callin’ me Frost."