Title: Crucifixion
Fandom: Vortex
Characters: Ume-kun
Rating: T
Warnings: Implied torture, lousy aesthetics
Notes: Pestilent and droll, like most of my writing, this is just a brief slice of what might have been a much longer story. 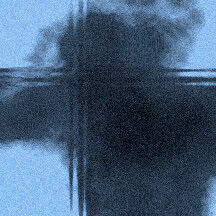 He watched his reflection in the pool as the life faded out of him…’goddamn crappy lighting.’ was his first thought, ‘gyah! i could’ve put together a better scene than this! who lit this room, and where can i complain?!’ even dying, his sense of aesthetics was unfaltering. the pool was lit in typical indoor-pool-at-night style, and it did nothing for him, much the same way the faintly rippling water did nothing for his figure…it was an irritating situation at best, watching his own death by crucifixion in a colour that was somewhere between periwinkle and straight grey…it was a generally hideous colour to begin with, and not one he particularly wanted associated with the manner of his death. ‘crucified next to a hideously coloured, badly lit indoor swimming pool, somewhere in the middle of an unspecified southwestern desert…’ he thought, ‘how the hell do i get myself into these things?’ the more important question, he decided, was how he would get out of this particular ‘thing’; and better yet, even if he _did_ escape the cross, how would he get out of the damned desert? (deserts were not among his favourite geographical features) he swore if he got out of this one, he’d never sleep again…